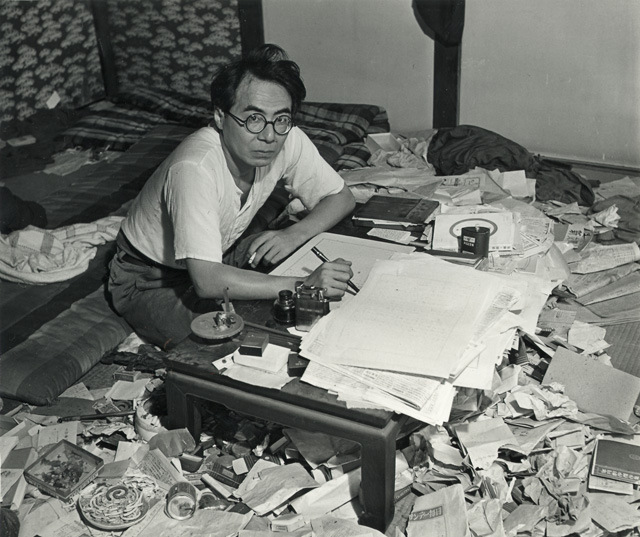 Ango Sakaguchi wrote this story, or I should say autobiographical account, just after the Pacific War. The story goes through Sakaguchi’s experiences as a middle school teacher. Those times are viewed in retrospect by the author, so it is peppered with a more mature Sakaguchi’s observations on his younger version’s character. I received it in my inbox a few days ago from the folks at Maplopo, a translation firm based in Kobe. I like and support their mission to make Japanese literature more accessible. The two principles, Doc and Reiko, work in tandem as a couple to do just that. I admire this. I wish Providence would allow such a joy in my life some day.

Reiko and Doc ask for feedback after each piece, if possible, and include a few prompts. Inspired by the prompt on my favorite passage, I wrote back the following:

You and Reiko did a wonderful job at the polish of this piece. It is so clean, and I can tell you both took your time in proofreading it. Well done. I hope you continue to build up a corpus of this quality. It may lead to amazing places.

I connected with Sakaguchi right away. I likewise could be a truant back in high school. And like him, I’d just be off by myself, doing nothing. I was a non-entity in my first year and remained much like a ghost for the remaining three. If I had to be in class in my body, I certainly wasn’t in my mind. And that reflected in my grades. Like him, I was “asked to leave” a high school, one of three I attended. And before I’m mistaken as some kind of anti-intellectual goblin, it’s not as if I did not enjoy learning. I just felt much the same as him. It’s funny. Today people think I was some top performer. I did scrape it together by the end and went to a middling university. But there, while I performed much better, I had compromised myself. To that end, here’s the passage:

You see, I had wanted to become a novelist since I was a young boy. But I convinced myself I did not possess the talent. This deeply entrenched belief that had me give up right hope altogether could be what fundamentally drove me to madness and desperation.

Looking back and examining my history during my year as a teacher, strangely and completely satisfied, I feel as though that person was someone else. And every time I think about it, it feels like a lie—an inexplicably transparent falsehood.

I had wanted to become an architect since I was a young boy. I didn’t care for much else. But like him, I convinced myself I couldn’t do it for various totally contrived and false reasons. This disconnection from my calling led me to four full years of dark nights of the soul where nothing came of them. Today, I’m making a career change towards what I always wanted to be. And I look back at the prior phases in my life much as Sakaguchi does. I feel nothing towards them other than that they were a pathetic imitation. That person, from boyhood onward, does not even seem to be me, but a papier-mâché effigy filled with half-assed ambitions.

As an aside, I also enjoyed his description of the noble teacher. I enjoy such a figure in my mind, though I’ve never met her, she is maybe just as much a ghost as this teacher truly was to Sakaguchi, for everything he truly felt towards her was an invention. The one in my mind is a person who has visited me in my dreams over the last five years and we do nothing but walk and talk. It’s embarrassing to admit to having an imaginary friend.

Thank you for introducing me to this man. It is a shame he died so young. I’m sure I’ll enjoy his other words.

I want to elaborate on that noble teacher. She was a woman Sakaguchi had a sort of crush on, though it was more of an admiration tinged with adoration. He didn’t entertain any romantic notions with her. But the idea of her remained a companion to him in his mind. She was a comforting vision. That is much the same as the character I wrote about above. She has appeared to me many times over the years. Perhaps I’ll write about her.

I also admit… I approach a lot of these readings so selfishly. It is as if I am always looking for a mirror to see back onto myself. Though that’s not always the case. Sometimes I do read a story for its own enjoyment. But I am a vain creature, fundamentally, always looking for signs of myself.