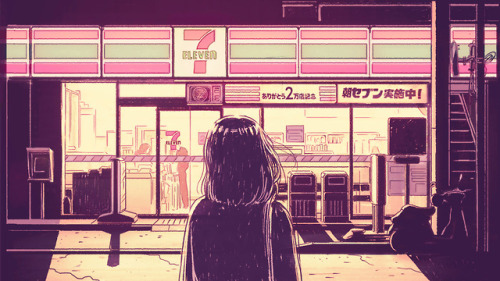 I can see why this delightful novel won the Akutagawa Prize. Very rarely are high-functioning autistic people depicted in any kind of media, and those depictions are also rarely ever popular. Those that are popular often focus on the suffering of their keeper, think Kenzaburo Oe’s A Personal Matter or the movie Rain Man. Those depictions also are usually of people who are not especially high-functioning. Furthermore, they’re most often male. In Konbini Ningen, or literally “convenience store person,” the main character is a high-functioning autistic woman just entering middle age. She has been working at a convenience store, or konbini, for 18 years. She has never had any other job. She is very comfortable. She has never been in love. She is not so lonely. There’s no need to feel sorry for her. It is a very interesting perspective, though little of interest happens. But what else to expect? My reading of this is very alternative and differs even with what the author herself has said about the work.

Autism is a spectrum. Indeed, I think of it like a large color wheel. Those on one side are often entirely different than those on the other. Some are entirely dysfunctional, forced to burden someone and often unaware of it: their condition is a curse. Some live extremely rich and fulfilling lives, often climbing to the top of their field and having no trouble with deep interconnection with others: their condition is a feature. Our hero, Keiko Furusawa, falls somewhere right in the middle. Had she not been autistic, she may have been a perfectly unassuming and ordinary woman. But she is not. And she is further victimized by the poor ability of Japanese society to manage conditions like hers. Her family just hopes they can “pray the gay away,” so-to-speak, or treat her normally or with “greater affection” at the suggestion of a counselor. Anyone versed in how to manage autism knows that isn’t enough. She needs a manual by which to live her life. She finds just that in a konbini. Everything is spelled out for her. It isn’t the highest and best calling for her, but she doesn’t know that. It’s clear she is very astute, when in a setting comfortable for her. Perhaps her autism could have been a feature, had she found her calling. But she never did. So she has been comfortable in her dead-end job for exactly half of her life so far.

Everything that happens is mostly mundane. But like Schoolgirl, it is interesting to be intimate with her thought processes. In fact, the author herself had spent time working part-time in a konbini, and she wrote this character so authentically that I wonder if she is not at least on the spectrum herself. There is no character development. But that’s not what one is there for. It’s a voyeuristic experience, sans foreplay and climax. It is like a steak with no sides, where every bite is good, every bite more or less the same. Some people doing a very superficial reading of this where they expect a formula might say, “where’s the beef?” The whole thing is the beef!

And what is its flavor? It is a painful attempt at imitation of others on the part of Keiko. Keiko can be a stand-in for John Q. Public. The reader can find some understanding of her when viewing her through her foil and faux-boyfriend, who I won’t name here. He is elsewhere on the spectrum. He is more the “Elliot Rodger” kind, he reminded me greatly of Rodger. That unaware, entitled, disgusting, repulsive kind of autistic male that is little more than an overgrown toddler. He does nothing but sit in Keiko’s bathtub on a futon he dragged into there and mess around on his tablet. He does no work. He sponges off of her subsistence-level food. He takes no responsibility for anything. He has no recognition of boundaries and stalks women. Keiko feels he is just one step above a sexual offender, which is accurate. But I also feel he is one step entirely under Keiko in all forms of development. He can’t speak to people properly or understand properly. It’s evident he can’t take care of himself as he’s malnourished and has awful rotten black and yellow teeth. If autism were a 5 level scale, Keiko would be at a 3, that is, “high” functioning but really marginal if she is taken out of familiar surroundings and habits. This other man is a 2. He is not to the point where he needs to wear a diaper and be confined to a group home, but he is every parent’s worse nightmare, and probably smells of Doritos chips burps with a hint of Mountain Dew. In sum, he is utterly good-for-nothing, but occupies an important part of Keiko’s outward attempt at a “normal person” identity: half of a fake and loveless couple.

I like the title in Japanese because it takes gender out of it. “Ningen” means just person, human being, human. Keiko is a person of the convenience store. A convenience store person. By the start, at the end, nothing more, nothing less. But forget about the store. It doesn’t matter what gender Keiko is, though I believe the author wrote her as a female for it would be easier for her to write and immerse herself into. Keiko can be anybody, anywhere, working at any job. Keiko can be a banker, a salesperson, a small business owner, the manager of a bowling alley, it doesn’t matter. For Keiko has no identity outside of her job. Keiko, in fact, is painfully aware of having no identity at all, and sees no alternative to the way things are. She keenly observes how her colleagues dress and act and memorizes their speech, habits, mannerisms, ways. She takes note of the brands of their clothes and accessories. She mimics. She is water, forming around any vessel that comes into contact with her. And she sees this is true for others, too. Though she must make a conscious effort to be this way, others appears to do so naturally. Keiko is a dissection of our habits as humans.

One is pressured to work, do some kind of work, even if it totally useless and non-contributing. Everyone was happy for Keiko at 18 when she first managed to get this job. But you’re expected to move on, to continually advance, even if you are very good at what you do. Instead of seeking to advance, she just works harder in this job. She works hard to sustain the “organism” that is the konbini. The same could be said for many people. They work not for themselves, but for the entity. And gradually, she lost sight of anything else she might have had in her. The konbini infected her entire person. She only ate food from it. She only drank water from it. Her body is made up of the fruits of the konbini. She goes to bed and dreams of work to just get up and live work the next day. Yet she is perfectly content, unlike how John Q. Public may be. She is unaware of any deficiencies. Even as her acquaintances and her sister move on in their own lives, aping the instinctual motions that one feels one must do by certain age intervals, like getting married and having children. Therein lies this illusion of “movement,” of “development,” but its really like watching a film superimposed on your retinas where you already know the ending. And indeed, every person, even the sister, is presented as water, in various states of crystallization, having no true identity, just like her. To this end, the friend group is almost like this big unified voice all echoing the same sentiments whenever they appear. As I said before, she is astute, her observations about them (and others!) are astute, but amazingly, she is entirely blind to herself.

I said to take gender out of it. Replace the names with ungendered variables. If one reads the book in this way, what might they guess of the character’s genders, particularly Keiko and her quasi-boyfriend? I would assume the opposite. Too often does a guy work in some dead-end job and take on a dead-end useless woman to maintain the illusion of normality to their likewise dead-end social sphere. But spinning the genders around has made this more interesting. For I’ve seen situations like this one, too. A woman with no real options having to pick from the bottom of the barrel and ending up getting a useless parasite stuck to her and just dealing with it, for she feels she has no other option. And that is the life of Keiko. She feels she has no other real options. She is comfortable in her stasis. She is comfortable hovering around as a deep sea jellyfish. Take her out, and she falls apart. She can’t breathe. She has no form. But let her float in her tank forever and she will do just fine as a human ornament at the konbini.