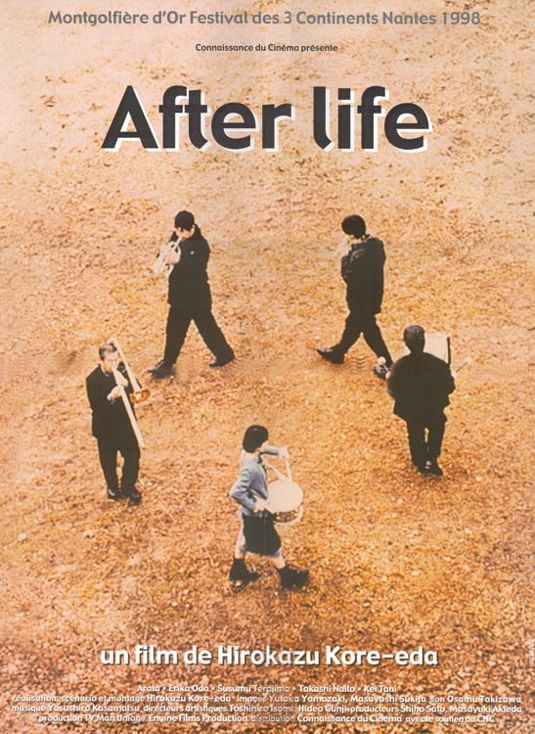 I had the pleasure of discovering the genius of director Hirokazu Koreeda recently after watching Nobody Knows, which led me to Still Walking and After Life. I’m addicted now and fully intend to watch the rest of his body of work, with After the Storm up next. Koreeda’s work reminds me a lot of Yasujiro Ozu, a comparison that has certainly been made before. I enjoy his scene setting, the little filler shots that add to the atmosphere, and the scant use of a soundtrack. I appreciate this, since I consider the soundtrack of a drama to be no better than a laughtrack oftentimes. Koreeda can masterfully get me to feel what he intends me to feel without having to do anything cheap. I am happy to know that there are creative people in the world who can produce such works of art and still be commercially successful.

After Life is an interesting take on just what the title says – what comes after life. In this case, the souls of the departed are sent to a sort of old civil services-looking building that reminds me of a large version of the government building in Nikko or some of the more worn-out pre-war university buildings I’ve been around. It has a special kind of atmosphere, like the old moldering resorts of the 1920s that used to be around Florida when I was a child but are either all renovated or demolished by now. The Kanaya Hotel also comes to mind. Anyway, the spirits arrive at this building and are instructed by the souls working there that they are to try to remember their most prized and treasured memory. That is, if they had to choose only one memory and leave all the others, which would it be? Upon choosing, the memory will then be recreated in the form of a short movie with the spirit acting as a sort of creative director, and with the perfectly idealized, they will have one look at it in a screening room at the facility before fading on to the true death. They are left with the feelings of happiness or tranquility that the memory evoked and supposedly stay suspended in this feeling for the rest of eternity.

Naturally, some people have some difficulties choosing a memory. My friends that have watched the movie and I are perhaps part of that camp. I have a strange way of recalling things where I feel little to no emotion about the memory, as if I am remembering something that happened to somebody else. Even moments that I know I was overjoyed don’t feel that way in my memory. Those memories that do have at least a bit of feeling attached to them are those in which I was perfectly at peace, or at least I imagine myself to have been. Seldom do these memories involve another person, if ever. This saddens me. In a way, it feels like a waste, though perhaps it mirrors the way that I have lived.

Just off-the-cuff, if I had to choose tonight, then I might choose a time in which I was sitting at Arisugawa-no-miya Park by the pond eating a load of delicious white grapefruit. It was a hot and muggy summer but it was perfect. I couldn’t have been more content. I felt hope in the world, hopeful for myself, and felt as if I was truly living with plenty more living to do. That moment was a liminal time within another liminal time, and it seems special in my mind. Another time might be when my friends and I were sitting in a hot spring with macaque monkeys while it snowed on us in the early morning. The hot spring overlooked a pretty ravine. Across the ravine, a few alpha monkeys were fighting around a geyser. If I could preserve the first minute or so of that when I was just acclimating to the heat, that would be perfect. There’s nothing profound about it. It was just a nice moment in time, and a rare time of happiness and tranquility with friends. I wish such times would come back.

Koreeda has spoken about the artificiality of memories, that is, how one might distort the memory somewhat to be better (or worse!) than it actually was so that it may fit a narrative one has. He said:

I saw that human emotions are the sparks that fly when “truth” and “fiction” collide. In this film, I wanted to explore the consequences of such collision by investigating the uncertain area between “objective record” and “recollection”. Although the memories in After Life are presented as real experiences that are later reconstructed as film, you can’t really distinguish the stories characters tell as “truth” and the recreations as “fiction”. They intertwine with great complexity. Our memories are not fixed or static. They are dynamic, reflecting selves that are constantly changing. So the act of remembering, of looking back at the past, is by no means redundant or negative. Rather, it challenges us to evolve and mature.

By “truth” and “fiction,” he means the distortions we have in our own perspective that help color the “truth” of the event that gives us our unique views and reactions. My time at the spring with the monkeys could be frightening to another, or my time at the pond with the grapefruit and cicadas and heat might be an annoying bore likewise. The exaggeration of the truth may also make the memory more poignant, moving, interesting, or happy to oneself. That truth may take on many different shades or distortions with time, as people are remembered more or less fondly than they were then, or times feel more interesting and exciting than they truly did at the time – or only when compared to the dreariness of life in the present.

In this way, memory can be quite funny. I saw a silly movie titled The Family Game that primarily focused on a boy’s time trying to pass the entrance exams to high school and the effects his tutor had on him and his family. The scenes in school felt oddly nostalgic. But then I wondered why. I absolutely hated every moment of school all the way until I entered university, which was enjoyable at times. Intermediate and high school were particularly awful and I wouldn’t want to go back to that time for anything. So why did I find it oddly nostalgic? Maybe I’m looking back on those times with the confidence and knowledge that I have now, that maybe I would have done much better, enjoyed it more as the person I am today, and so on. Or maybe it is a way of surviving. Surely we can’t go about our lives feeling with memories that burn just as freshly as the day they happened. It would be difficult to lead much of a life.

I hope I am able to fill my mind with more satisfying memories. I especially hope that one of these might be so wonderful that I would happily sacrifice all others to live with this single memory forever, if I was made to do so. Though each memory is a piece of a mosaic that makes up the image of me. Pinpointing one gem and ignoring the rest would destroy all the nuance. Then again, who needs nuance in the afterlife? I just want to be happy.