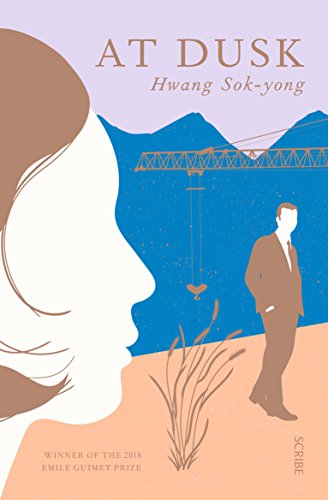 Nowadays, my only pleasure is poring over online maps for new plots of land and imagining the kind of house I would build. But I have no family to live in that house with me.

The closing lines of Hwang Sok-yong’s “At Dusk” are hard to bear. I felt an especial connection to the architect character, Park Minwoo, whose thoughts are quoted above. I have written a few times on the nature of “what makes a home,” and I was happy to read two books lately that massaged that idea for me. “At Dusk” explores just that – what made a home for Park Minwoo? He doesn’t seem to know, which is ironic considering his profession. He is an atomized man, someone that would fit well into any of Michel Houellebecq’s novels, though less debauched than any of his characters. Though like Houellebecq’s protagonists, Park has butchered the choice cuts from his notion of morality and tossed out the rest for the sake of emotional self-preservation.

I went into this book without knowing anything about Hwang, the author. I understand that he is very politically active. I surprisingly did not detect any overt agenda in this book, though some of the nuances might have been lost in translation. Nonetheless, he touches on familiar hot button issues to people having grown up after the Korean War, with a particular focus on the development and redevelopment of the build environment. During the New Village Movement, it was clear that most structures being built were not up to any kind of basic acceptable standard and the majority – as high as 90% – failed basic inspections. Many came crumbling down later during earthquakes or were destroyed by typhoons. There was just such a rush to rebuild that little thought was put into the sustainability of the very foundation upon which the country was resting. That proves to be an insidious issue to Park, as he sees some of his friends and acquaintances being investigated or jailed for corruption. This issue goes on to the current day, for the construction industry is a vehicle popular for organized criminals to carry out massive fraud. Certainly this is nothing new, but the sheer scale of fraud and shoddy housing being foisted on people is hard to comprehend.

An undercurrent throughout the novel is people’s instability, especially in the early lives of Park and his love interest, Cha Soona. They both grew up together in a slummy neighborhood on the outskirts of Seoul called Moon Hollow. I pictured it resembling the ramshackle neighborhood in Ikiru with the filthy cesspool in the middle of it. To put it in perspective, this was the 1960s or so and there was only a single glass window in the neighborhood. Youth gangs ran the neighborhood. There is no truly clean water. Food is meager. Perhaps you get the picture – it is a barely reconstructed neighborhood of displaced people from the provinces. And like Park’s first neighborhood, which at the time was a ways away from Seoul, people teeter between the slum and the abyss. Of the dozens or hundreds of children in the neighborhood, two had successfully made it to high school, one being Cha. Park was soon to follow, and clearly escape poverty. Cha was not so fortunate.

I don’t want to spoil the plot details of the book so I’ll reveal no more about it. But when reading about Park, I couldn’t help but be reminded of my father, in some ways. That is, the sort of forlorn character he cuts out to be now. I imagine he feels much the same as Park when thinking back on his life, as I’m sure many people do, but him in particular with how his family has come to be, and perhaps how atomized he feels. Sadly, this is nothing with which I can help him, and vice versa. Park seemed to be an alien adrift in some derelict space ship looking out onto the world below, or above, or besides. He clearly worked so hard to get to his station in life. But early in his teenage years, it becomes clear that every little thing he does is for advancement, and in his personal life he just muddles along. He accepts a prestigious arranged marriage which quickly turns into a dead one, his children are distance, he evidently has produced nothing worth recounting in his work pursuits aside from a great deal of money. It’s a typical story, maybe. Another Citizen Kane, or any other among dozens of similar works.

However, the layer of meaning I found atop everything else that made this novel worthwhile was that Hwang was showing a character who had a direct part in the reconstruction of Korea but who comes to lament the mean little structures everywhere, the instability, the greed, the carelessness, the rotten airs people put on. He has a sort of envy for an architect colleague who produced small-scale unique projects around the country. But who is to say, if he was in the position of his colleague, that he might not envy others for their money? He is, after all, envying artistic gumption from a position of security. Tomorrow, he could do similar things. But he has no such will, as is often the case as people slip into the routines that cause their later life to slip away.

How might have things worked out for Park had he stuck in his pursuit of Cha? How might things have worked out for her, too? Her ending is the most tragic of all, perhaps. How about his family? How about the warm home that he envisioned? Maybe it might have all come to fruition, and it would have been beautiful. But I understand why Park turned out the way he did. Some people having read the book feel that the characters are too simple. But I see real people. I see people I know, or have known. I even see myself. It helps knowing that so many architects, in particular, end up like Park.

The quote at the top of the page struck me, like hitting my head unexpectedly. I do this very thing. I’m known for it. I see myself plodding on in that direction in slow motion, but I can see no other way.