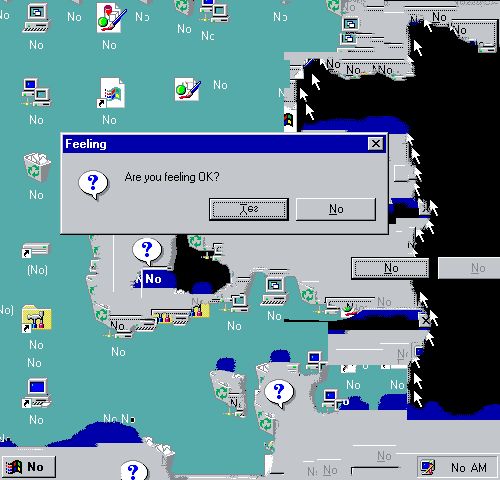 The Windows XP login jingle chimes and fills me with a cool wave of anxiety and depression. My professor exclaims how someone stole his laptop out of his office so we had to use the classroom computer. After booting up a very old version of QuickTime, he loads an ancient Harvard Business School simulation. It has many built-in videos from the early 90s or perhaps even the late 80s – an executive putting a golf ball around his office while wearing one of those horribly baggy suits with a hideously colored shirt that was so popular at the time. The footage was grainy. The audio had the faintest echo. Every sentence was peppered with the dated business buzzwords and jargon of the time.

I started thinking of vaporwave, Arizona iced tea, Fiji water, and Polo Ralph Lauren. Then it grew darker – run down Blockbusters, empty malls at closing, the slightly chemical smell of the popcorn at the AMC theater chain, seas of grey concrete parking lots scattered with greyscale Japanese cars. It is cloudy but not rainy. You see a family a ways away, the child is wearing cargo shorts with a shirt that has a flame graphic on it. Maui Jim sunglasses. White socks and sketchers. Millions of dead products piled underground in a landfill off the side of a crumbling interstate. Polyester and rayon blend suit. Crushed Honda civic. Dead computer monitors piled in a junkyard in India

I remembered two winters ago. The Shinkansen passing through hundreds of dead towns. Farmhouses reclaimed by nature. Rotting Suzuki Jimnys, Nissan Patrols, and Toyota FJ40s. Onsen towns with no visitors. You walk into an old villa in a decayed seaside vacation town. There is a calendar on the peeling walls. It shows a cheesecake picture of a nubile model. It is stuck on 2002. You go into the bathroom, it’s wall caved in outwards so you can see the bay. You sit in the pile of leaves and want to scream. You feel like sweaty Naugahyde walls are closing in on you. There are thousands of towns like that, like all the rotting Midwestern factory towns and abandoned British fishing villages. The thought fills me with terror. The thought fills me with a sense of loneliness and despair, but it’s loneliness I can hardly describe. It’s like the loneliness one might feel when wandering around an office district after-hours and nothing is open. There’s no life. No trees. Not even critters running around. No stores open. Nothing. Isolation. That is how the 90s makes me feel.
And all that flashed before my retinas in the few minutes left in class. There are certainly some places like this in Florida. There are many boomtowns filled with the abandoned and decaying dreams of countless real estate speculators and developers as well as the people who bought into those communities. It makes me sick. It’s like how I heard of South Beach being in the 80s. All those Art Deco hotels with ancient people sitting on the front porches in rocking chairs, rocking away. Rocking away. Rocking away. Oh, there goes a car. There goes another car. The sun rises and the sun sets. Eventually, not to be reminded of the decay anymore, some things got torn down. People in the 50s felt a little bit that way about the 20s. I believe that it is a 20th/21st century phenomenon of people despising their parents’ generational trappings and wanting to undue them. I don’t blame them. The houses, consumer products, style, slang, music, art, everything out of the 90s fills me with despair.