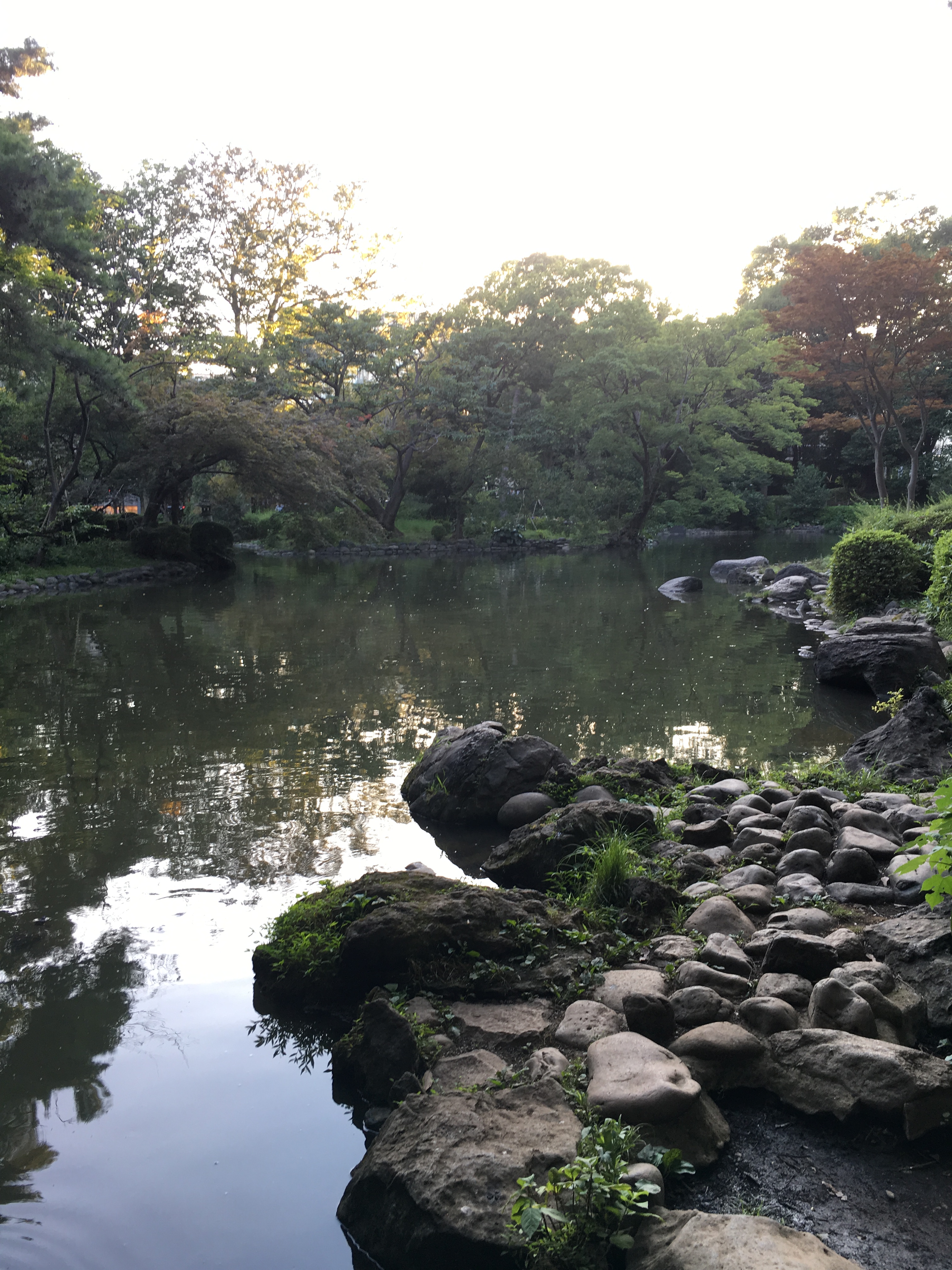 The scene is set at Minami-Azuba around 4:30 in the afternoon. It’s very quiet in Arisugawanomiya Memorial Park. Your narrator is sitting on a bridge of concrete made to look like wooden logs overlooking a brook. Two schoolgirls of around fourteen or fifteen in uniform are playing in the water, feeding bread to the carp and turtles that surface. The sun shines through the gingkoes, elms, and cherry blossoms. A commotion happens in the water behind me as two carp fiercely argue over a bit of bread that drifted their way. Birds with a squeaky song reminiscent of a train coming to a stop in nearby Hiro-o station and a cacophony of cicadas rings out with a jazzy disorderliness from all those trees. In my hands I have half of a white grapefruit purchased from a nearby grocer and a short essay written by Jun’ichir­o Tanizaki titled “In Praise of Shadows”.

Tanizaki spoke of how, in 1920s and 1930s Japan, countless Japanese were discarding many centuries of aesthetic history in order to ape what they thought to be American ways. They built American houses, donned American clothes, wore American hairstyles, and the women painted their faces with makeup in a way decidedly not Japanese. Capturing this sentiment in a little tale, he spoke of how the older generations in nations the world over are lamenting how fast life has become for the youngsters and how, “almost as if diseased,” the old were being avoided or intimidated into staying within their homes. No longer is it my world, they must have thought, feeling like last season’s cast-off gown, to be stowed away in a closet and looked at occasionally. However, Tanizaki noted that the old often feel this way—his mother and grandparents wished to go back a hundred years, but at that time those people wished to go back two hundred… and then there were those around when the Portuguese landed and they wished they could go back three hundred years when “times were simpler”. This is something we all wish at one time or another. Looking at the schoolgirls innocently playing, I wished much the same. I was reminded of myself playing games with friends in the neighborhood park.

Looking out beyond their playing and into the clear waters of the pond beneath the shade of the trees overhead, my eyes traced over the dark forms beneath the water swimming about and then to the elderly park-goers shuffling in and out of the gate, others sitting at benches playing the ancient game of go, others reading novellas in Japanese. I turned back to my own book and read and reread the passages on the aesthetics of traditional Japanese women. They were one with the darkness. The only hint of a woman being there in those dusky houses was her ethereal face above her layers of kimono. I looked back out across the dim light filtering through the trees and felt then the feeling. I imagined myself in the dim light of a Japanese room, scroll with a Laozi sort of scene painted on it, treasured cupboard in the corner containing my clothing and… hers. Her hairpins, her precious mirror, her underclothing and soft silks and makeups and all other kinds of womanly trappings. The floors are naturally tatami and the walls all a comfortable series of beiges and natural earthy tones. One whole wall is entirely of shoji screens. Opening up one of these screens I then step out upon the veranda and put on my sandals waiting for me by the track of the screen. The view reminds me of my grandparents’ house all the way back in Fort Pierce, Florida—it is a very Zen vista of a pond with cattails in the distance, an overgrowth of tropical plants abounding, stones collected from my father’s mines forming a zigzagging walk to the small dock on the pond. A further distance away past the many layers of this onion is a gate and there, the world.

She is sitting in front of the open Japanese hearth boiling tea. This hearth is in the middle of the floor of the multi-purpose room next to the bedroom where guests can be entertained or visitors can sleep upon the futons stored in the closets hidden away by more shoji screens. Aside the light of the fire there is that lovely candlelight casting its shadows upon the lacquer tea set. The tea itself tastes of malted milk, almonds, and honey. The fine flavor of the good dark tea fills up the back of my nose as it always tends to do and I savor the taste. Her face is a glowing white that as Tanizaki says is nothing like the whiteness of a European woman. Never have I felt this bewitched. A similar whiteness, that of moonlight, shows in streaks over the veranda, just making it past the prodigious eaves of the Japanese house. My heart is captured by her sweetness. There are no words.